At first sight the downward trend we are currently observing in Russian manufacturing growth - at at time when domestic demand and construction are accelerating - seems strange. The most probable explanation is that the slowdown is associated with challenges to Russia's tradable sectors (outside resources and metals). Those parts of the manufacturing sector that service domestic demand and encounter limited competition from imports should, after all, be able to continue to thrive in the midst of Russia’s booming domestic market. But the ongoing appreciation of the ruble and the tightening we are seeing in the Russian labour market (as workers, for one reason or another, disappear from the workforce) are evidently serving to drive up unit labor costs, in a way which suggests that wages are growing much more rapidly than productivity. And without commensurate increases in productivity, real ruble appreciation and large wage rises make achieving export competitiveness in manufacturing sectors (outside resource-extraction and metals) an ever more challenging process. 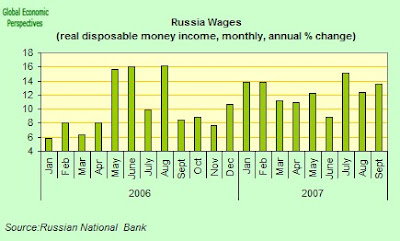 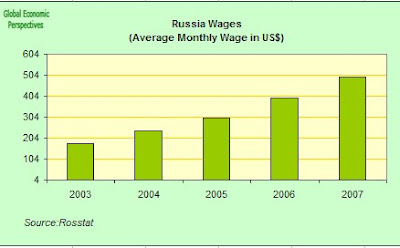 According to Rosstat, average real wages and disposable income increased by 16.2 and 12.9 percent, respectively during the first nine months of the year (see chart above). Increases in real wages continue to be well above the GDP growth rate - and surely the productivity growth rate - in most sectors of the economy. Almost all sectors of the economy are now reporting increases in nominal wages well above 20 percent across 2007. The average monthly dollar wage has been steadily increasing over the years (see chart above) and increased to 497 dollars (or by 31 percent over the same period in 2006) in the first nine months of 2007 as the rouble continued to appreciate against the US dollar. Current trends suggest that the average monthly dollar wage may exceed USD 520 by the end of this year.
Posted by Edward Hugh at 10:55 AM