Apart from the sudden inward surge of funds which we have witnessed in the second half of 2007 (see below) the most notable monetary development in 2007 is that other surge, the inflation one, which outside and beyond Russia, we have also been witnessing across much of the EU10 as a region.

At one point Russian inflation did seem to have been coming gradually under control, and remained this way into the first quarter of 2007. Since then, however, it has steadily been gaining and sustaining momentum, and the problem has only deteriorated with each new monthly reading as the year has advanced. In fact inflation reached a cumulative total of 9.3 percent over the first ten months of 2007, with the rate accelerating to 10.8 percent in October, the highest level recorded since February 2006. This was up from the 9.4 percent registered in September and a month on month increase of 1.6 percent. 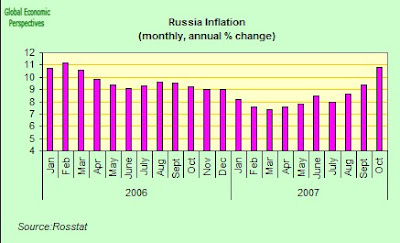