Thus given that Russia in now an economy which may be considered (after years of taking up outstanding capacity slack, see more below) to be an economy which is growing close to potential, benefiting in part from high energy prices and large capital inflows. In this situation Russia faces two main challenges: inflationary pressures and an overly rapid appreciation of the exchange rate. Both of these represent serious problems in the Russian case since they are liable to produce a steady turn around in the trade balance and expose a Russian economy dependent on an inward flow of funds to the vagaries of world energy prices and the risk appetite of overseas investors.

As can be seen in the chart, the value of the rouble has been rising slowly but steadily over the last couple of years, the big problem which could face the Russian authorities would be if any move to ease currency management procedures were to lead to a large and rapid appreciation in the rouble, and if this were then to be associated with an equally sudden inward surge of funds, funds which would in all probability generate a further surge in domestic demand, domestic demand which, given the critical state of Russia's workforce and labour market, could not be met internally, and hence my cryptic adaptation of the standard inflation definition in the title of this post, since what we would actually have would be too much money chasing too few people. 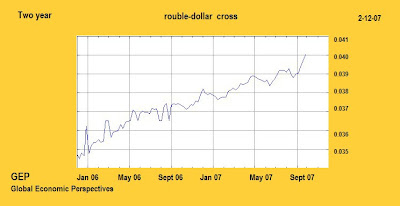