State handouts cannot continue indefinitely, not least because reserves no longer cover total foreign liabilities: on the basis total debt was US$540bn at the end of September 2008, and that US$73bn was repaid in the fourth quarter, total debt is now US$467bn and private-sector debt US$425bn. Russia entered the crisis with the world’s third largest cache of central bank reserves, but it has been dwindling at an accelerating pace. By mid-January, reserves had declined to just below US$400bn, meaning that more than a third of the total was spent over the past five months.

Longer post coming over the weekend.
Posted by Edward Hugh at 9:45 AM 3 comments:

Russian industrial production dropped sharply again in December - by the most since at least 2003. Output was down 10.3 percent following an 8.7 percent fall in November, according to data from the Federal Statistics Service announced yesterday (Thursday) by central Bank Chairman Sergey Ignatiev. Output growth for the year was 2.1 percent, the slowest since at least 1999. 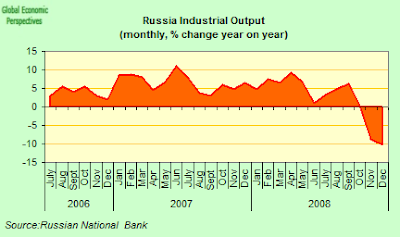 This data is not surprising, and only confirms what we have been seeing in the VTB PMI. The next interesting data appointment will be on 2 February, when we should get to see what happened in January.

Russia’s international reserves fell $30.3 billion last week, the second-biggest drop on record, as the central bank accelerated the rate of the ruble devaluation and sold increasing quantities of foreign currency in an attempt to manage the pace of the decline. Russia’s reserves have now fallen 34 percent from the record high of $598.1 billion in August while the ruble has fallen 29 percent against the dollar over the same period.

Some of last weeks decline can be attributed to the dollar’s 1.5 percent gain against the euro in the week ended January 16, since this means a fall in the dollar value of the other currencies in the reserves. Evgeny Nadorshin, senior economist at Moscow’s Trust Investment Bank, estimates that about $18.3 billion of the drop can be accounted for by central bank interventions last week.

(The reserves are made up of 44 percent euros, 45 percent dollars, 10 percent pounds sterling and 1 percent yen).

The Ruble continued to fall today (Friday) after the central bank announced last night that it was “finished” with its gradual devaluation of the ruble and was going to let “market factors” help determine the level of the currency. The bank set the weakest end of the currency’s trading range against a target basket of dollars and euros at 41 as of today, or 36 per dollar, at a USD of around 1.3 to the euro. Bank Rossii has now widened the currency trading band 20 times since mid-November as it seeks to rebalance Russia's economy amid plunging oil prices and the global financial crisis.

Following yesterdays announcement the ruble fell again this morning, dropping 1.5 percent (to 33.1073 per dollar), extending this weeks decline to 1.8 percent.

“This is an open invitation for speculators to test how quickly the ruble can get to 41,” said Ulrich Leuchtmann, head of currency research in Frankfurt at Commerzbank AG, which ranks itself among the biggest 10 traders of the ruble worldwide. “They wanted to decrease speculative pressures, but now they’ve given the market a good reason to increase them.”

As the ruble falls below the weakest level seen during the 1998 Russian crisis it may well be a timely moment to ask ourselves just what is happening to the real economy in Russia. To help us do this we have the latest survey data from VTB Bank Europe, which points to an overall contraction in Russian GDP in December. For an economy that was only months ago growing at a 7% annual rate this sharp contraction is astonishing. The VTB GDP Indicator is derived from the bank's Europe’s PMI surveys of business conditions in the manufacturing and service sectors of Russia. By weighting together the output measures from these surveys, an indicator of total output is produced. Regression analysis is then applied to derive an estimate of GDP growth. The bank itself describes the indicator as follows:

It is available several weeks ahead of official first estimates of GDP (for example, Goskomstat did not release their first estimate of 2005 third quarter growth until December 2005);

It is produced monthly, rather than quarterly, allowing quicker identification of changing business conditions and turning points in the economic cycle;

It is internationally comparable with other GDP Indicators that Markit Economics has launched, including the Eurozone GDP Indicator;

In December, the Russian GDP Indicator fell below zero for the first time since March 1999, to -1.1%, from 2.1% in November. Over Q4 as a whole, the GDP Indicator has signalled a year on year expansion of 2.0%. 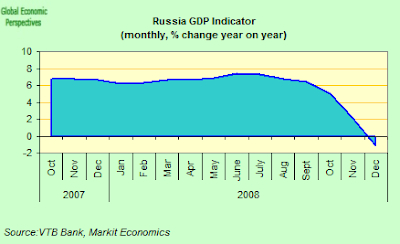 But this is perfectly consistent with a quarter on quarter contraction, as we can see in the monthly diffusion index GDP chart. So there is no doubt about it as far as I am concerned, the Russia economy contracted in Q4 2008, and really, effectively, the Russian recession has now started. 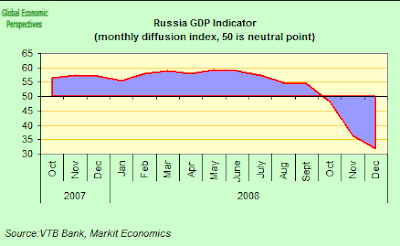 Further evidence for the slowdown can be found in the fact that unemployment rose 400,000 in November and while retail sales grew at the slowest annual rate in five years. Also in November, real disposable income fell on an annual basis while capital investment growth continued to drop back. The rouble ended 2008 20% lower versus the US dollar and 15% weaker against the euro, while the budget for 2009 remains under threat from falling oil prices.

The most recent official GDP figures from the Federal Statistics Service indicated year on year GDP growth of 6.2% in the third quarter of 6.2%, a figure which was itself a three-year low. This result was rather weaker than the advance trend registered by the GDP Indicator, which averaged 6.8% over the same period. The stronger VTB GDP Indicator may well reflect the absence of construction coverage in the PMI surveys – annual growth of construction value added in Q3 almost halved compared to the previous quarter – and probably also did not fully capture the effect of plummeting oil prices and weakening investment growth, on the other hand it the number is not a bad first estimate at all, and I emphasise, we get it at the end of the month in question.

In fact over the past nine years the official statistics office series and the VTB GDP Indicator have had a pretty close relationship, and the correlation is currently 0.88 (see chart below). Moreover, the Indicator has successfully captured the major peaks and troughs in growth throughout the period, thus I think we need to take the latest PMI based data very seriously indeed. 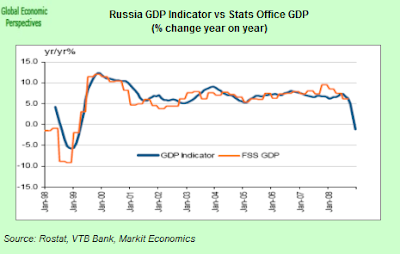 The ruble depreciated today to 33.1710 per dollar, its lowest level since early 1998. The ruble has lost 7.7 percent since official trading resumed this year, extending the decline to 29 percent since August, 2008. Investors have now withdrawn $245 billion from Russia since August according to data from PNB Paribas. Russia’s reserves, which are the world’s third-largest, fell by $171.6 billion to $426.5 billion between August and Jan. 9.

Bank Rossii, which manages the ruble against a basket of about 55 percent dollars and the rest euros, widened its target range again today. The currency has fallen 29 percent versus the basket since Aug. 1 and is now able to decline about 22 percent from a target rate, from about 3.6 percent on Nov. 11, the start of the current round of depreciation. The ruble weakened 1.4 percent to 37.8224 against the dollar-euro basket by 5 p.m. today in Moscow, extending this year’s drop to 6.7 percent. It depreciated to 43.8880 per euro, the lowest since the common currency’s introduction in 1999, and has lost 5.7 percent this year.

The ruble weakened 5.3 percent against the dollar and 9.8 percent versus the euro last week, the most since 1999. That compares with a record 71 percent slide in the week to Aug. 28, 1998, and a 42 percent slump the week after. Russia’s Mosprime rate, the average interest- rate banks charge to lend money to each other, rose to a two- month high of 12.5 percent today, according to the central bank.

Russia’s economy will probably grow more slowly this year than earlier forecast as the price of oil, the country’s chief export earner tumbles, according to Merrill Lynch & Co. Gross domestic product will probably expand 0.9 percent, rather than the previous projection of 3.7 percent, Merril’s Moscow-based economists Yulia Tsepliaeva and Ivan Bokhmat wrote in a report sent to clients.

“Russia has been unable to avoid the strongly negative impact of the global crisis and downward correction of commodity prices,” Tsepliaeva and Bokhmat said. “The inefficiency of the government plan and limited channels to deliver government support and liquidity to mid-sized companies make a hard landing scenario more and more likely for Russia.”