Russian manufacturing contracted in October at the slowest pace in over two and a half years as the global financial crisis cut demand, according to the latest reading on VTB Bank Europe's Purchasing Managers' Index, which fell to 46.4 from 49.8 in September. This was the third consecutive month in which Russian industry has been contracting. A figure above 50 on these indexes indicates growth, while one below 50 means contraction. 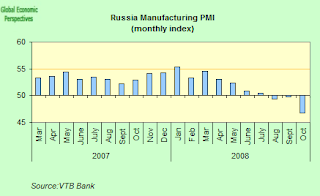 
Sberbank, VTB Group and the other Russian banks lost a total of $1.6 billion from their stock and bond holdings in September, according to an estimate from UniCredit analysts who based their estimate on central bank data. Overdue loans held by banks rose rose in September to 1.45 percent (up from 1.33 percent tin August, according to Rustam Botashev, a Moscow-based analyst for UniCredit. The central bank said on November 1 that personal deposits in Russian banks fell 1.5 percent in September as people withdrew money amid global financial turmoil. Total deposits declined to 5.89 trillion rubles ($220 billion) on October 1 from 5.98 trillion rubles on September 1

The total assets of Russia's combined oil funds rose 4 percent - to $197.4 billion - in October after the transfer of taxes from oil revenue, according to data from the Finance Ministry. The National Wellbeing Fund held 1.7 trillion rubles as of November 1, equivalent to $62.8 billion, while the Reserve Fund held 3.6 trillion rubles, or $134.6 billion. Russia transfers a part of its oil and gas revenue to its two oil funds, which were created after the Stabilization Fund was split in two in February 2008.

Reserve Fund
AUM: $134.6 Billion
The Reserve Fund may, by law, only invest in foreign government bonds.

National Welfare Fund
$62.8 Billion
Initially funded with just $32 Billion starting, this fund could increase dramatically in the future if oil prices start to rise again. The fund will mostly be managed by the Russian Ministry of Finance. The fund also has the ability to lend money to Russian banks. Furthermore the Fund is intended to serve as a tool for absorbing excess liquidity, in order to try to reduce inflationary pressure as well as insulate the economy from volatility in oil & gas export prices. The fund may invest in riskier assets, such as corporate bonds and possibly, at some point, equities.

The Russian state banks VEB and Sberbank are to get funds from the National Wealth Fund to place on deposit until 2020 as part of the recent plan to rescue the country's financial sector. The draft of the new law states that Sberbank will get a subordinated 500 billion rouble ($19.11 billion) loan at an annual interest of 8 percent and will issue a bonds to guarantee it. VEB will get the money from the National Wealth Fund at a rate of 7 percent a year and will provide loans to state bank VTB, and other banks and companies at 8 percent a year.

In line with this decision 170 billion rubles from the Wellbeing Fund ($6.3 billion) were last week deposited with the state development bank, Vnesheconombank. Russia has pledged a total of more than $200 billion to replenish liquidity and help companies overcome what is evidently now the worst financial crisis since the 1998 default on sovereign debt. The Russian government has said it will transfer 450 billion rubles from the Wellbeing Fund to Vnesheconombank, known as VEB, at an annual interest rate of 7 percent until 2019 for providing subordinate loans to banks. A further 175 billion rubles will be transferred from the fund at the same interest rate through 2013 to support local securities. Of the money deposited with Vnesheconombank, 125 billion rubles will go toward subordinate loans and 45 billion will be invested in Russian stocks and bonds.

Oil Production Down In October


Russia's oil production continued to fall in October - dropping for the 10th consecutive month - as producers struggled with rising costs and maturing fields, bringing the world's second-biggest crude exporter closer to its first annual drop in output since 1998. Output fell 0.7 percent compared with a year earlier to 9.87 million barrels of crude a day (41.7 million metric tons a month), according to figures released by the Energy Ministry. Output in Russia's oil heartland of western Siberia is sagging as older fields mature and producers are forced into remote regions to tap deposits. Oil companies need credit lines totaling $100 billion to make investments endangered by the global financial crisis, according to the Vedomosti newspaper, which cited a letter from Deputy Prime Minister Igor Sechin to President Dmitry Medvedev.

Ruble Falls The Most In Nearly A Decade In October


The ruble suffered its biggest monthly decline against the dollar in nine and a half years in October. Investors took $72 billion out of Russia during October, and have now taken around $140 billion since early August, according to estimates by BNP Paribas, while the Micex Index dropped 30 percent and pushed the yield on the 30-year government bond to a seven-year high.

The currency, which the central bank manages against a basket of dollars and euros, weakened 1 percent to 27.0955 per dollar last Friday, taking its decline on the month to 5.6 percent, the most since March 1999.

Bank Rossii, the central bank, buys and sells foreign- currency reserves to keep the ruble within a trading band against the basket. The mechanism comprises about 55 percent dollars and 45 percent euros and is used to protect the competitiveness of Russian exports from currency swings. The ruble fell 0.2 percent to 30.4036 versus the basket, from 30.3512 yesterday, and was little changed from 30.3675 at the end of September.

Bank Rossii - the Russian central bank - sold $40 billion in October, a record, to prevent the ruble from weakening beyond 30.40 to the basket. During the third week in October alone Russia's reserves dropped by $31 billion (another record) according to data from the central bank.
Posted by Edward Hugh at 5:32 PM