Russian service industries continue to expand, and they even did so at a slightly more rapid pace in September than in August. Evidently confidence has yet to feel the impact of recent financial developments, at least that is the conclusion which can be drawn from the latest VTB Bank Europe Purchasing Managers' Index report. According to the VTB survey growth in services rose to 55.5 from 55.4 in August. Nonetheless this was the third-lowest reading since the survey started in 2001. 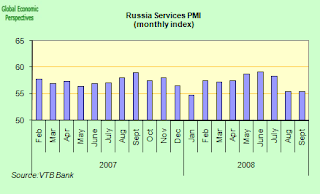 It is clear that the Russian services sector - and especially the financial services and real estate components - is going to slow more, and probably considerably more, and that end of year GDP growth will be down on the kind of levels we have been seeing over the last 18 months or so. How much down? I will need to see some more data from the real economy to get a "fix" on that I think. Just remember, patience IS a virtue, and better a later result than a more rapid one which is completely worthless. Mark to market, but in due course and not before.


Russia's RTS Index had its worst week in nine years this week, forcing the exchange to halt trading yet one more time, as the biggest slump in commodity prices in a half century sent raw-material producers lower. OAO GMK Norilsk Nickel, Russia's biggest mining company, had a record loss on the Micex after saying first-half profit sank 33 percent. OAO Gazprom dropped the most since Sept. 16.

The dollar-denominated RTS plunged 7.1 percent to 1,070.98, bringing its weekly drop to 17 percent, the biggest since 1999. Trading was halted three times this week on the RTS exchange, Russia's second-biggest bourse, because of stock declines. The ruble-denominated Micex Index lost 5.3 percent to 924.55 today.

Commodities, as measured by the Reuters/Jefferies CRB Index of 19 raw materials, have tumbled 10 percent this week, the most since at least 1956. Crude oil has fallen 11 percent so far this week on declining U.S. demand and economic growth concerns.